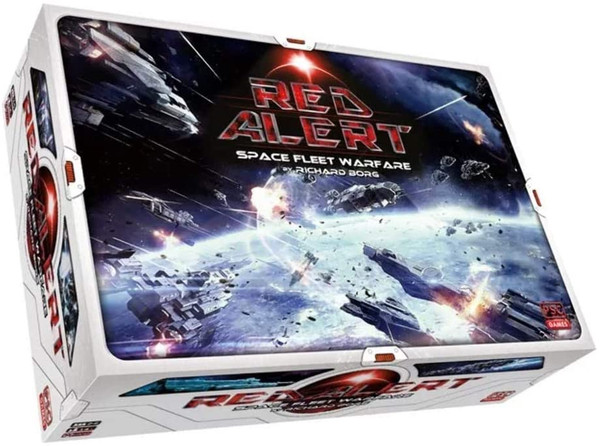 RED ALERT is a game system that allows two to six players to portray important engagements of space warfare. The battles showcased in the scenario section of the RED ALERT rules booklet focus on the deployment of rival starship fleets and important space features that are encountered in scale with the game system.The play of command cards drives the action and creates a "fog of war", while the battle dice resolve combat quickly and efficiently. Combat cards add an element of suspense and challenge players to maintain their star token reserves to power their combat cards through the entire course of a battle. The action on a combat card may hinder the opposition forces, enhance a player's units, or instantly change the course of a battle.An assortment of task force cards will allow players to quickly deploy a base grouping of starships. In addition to these task force units, before each battle, players will be able to augment and customize their fleets with the purchase of a number of support vessels.The object of a battle scenario is to be the first player to gain a set number of victory points. By design, the game mechanics in the RED ALERT game system are not overly complex, but the strategy and tactics players will need to execute to gain victory conform remarkably well to the advantages and limitations inherent to the various starships, their weapons, space features and written history.Contains:1x RED ALERT Booklet1x Star-field Game Mat92x Starships92x Ship Bases & 154 Poles18x Space Feature Tiles36x Star Tokens32x Faction Markers (16 for each faction)11x Red Alert Markers3x Cloaking Device Markers6x Capital Ship Debris Tiles50x Unit MarkersENGLISH LANGUAGE VERSION